I’m so bean-overloaded tonight 🙂 Let me start with saying “you must try this bolognese”. I wanted to have something hearty after a stressful day. Bolognese and socca was a first thing that came up in my mind. Easy enough, I already had ingredients in hands including soaked beans. I’m not normally a bolognese person and was also skeptical about making a vegan version of it. However, the smell, flavour and texture of this bolognese is surprisingly no different to a conventional recipe and even better (I dare to say). Nutritionally, you have a good amount of whole grains and vegetables in one bowl. I used two types of beans, mung beans and adzuki beans, for different texture here. Lentils will work really well too if that’s what you have in pantry. I also used a back of spoon to mush beans once the sauce was thickened instead of blending, which will give you a more meaty texture. Even meat eaters will get pleasantly surprised by the fact that there is really no meat in this dish. It is kept well in freezer so feel free to double up the recipe and keep the leftover in freezer for later use. 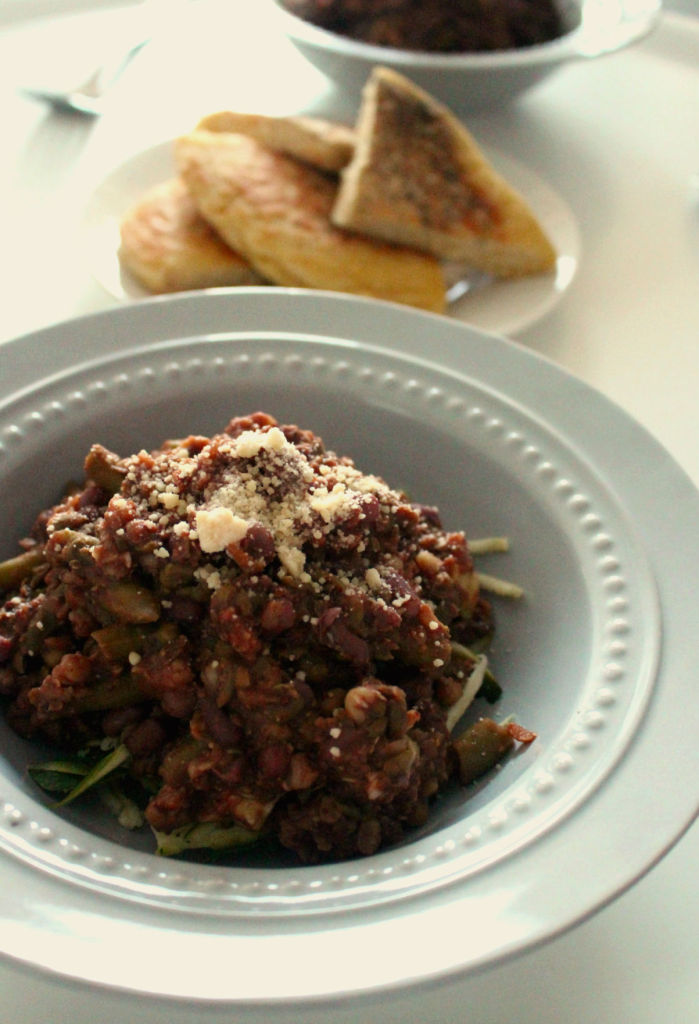 Drain and rinse soaked mung beans. Cover with cold water and bring it up to a boil. Simmer on medium heat for 15-20 minutes until cooked. Take it off the heat, drain and set aside. Heat a frying pan over medium heat. Add coconut oil and chopped onion into a pan. Stir and cook until translucent and fragrant. Then add beans and all other ingredients into a pan and simmer on low heat for about 20 minutes or until the sauce is thickened. In the mean time, use a vegetable peeler to make zucchini noodles. Season and dress with olive oil. You can leave the bolognese sauce as it is or blend it up if you want a smooth texture. To serve place zucchini noodles into bowls and then ladle the bolognese sauce on top. Garnish with Parmesan or nutritional yeast and a drizzle of olive oil.

January flew past so fast before I knew it. Isn’t that funny how time flies by as you get old whereas day by day goes so slow when you are a teenager. Apparently, that is because adults have more routines and things planned in their life than teenagers do. Teens are confused creatures, don’t know what they want to do or want to be and are also more likely a daydreamer and thinker. They are more creative and have more fun and laughs. I cannot agree more. I always make to-do-lists, plan my day/ month/ year and live in a rut without changing or challenging myself with new experiences. I’m sure we all have moments time to time asking ourselves ‘oh I used to love drawing’, ‘I wish I continued playing piano’, ‘I just want to sit down and read a book from cover to cover without getting disturbed’ or something like ‘I just want to relax and do nothing’. Why is it so hard to relax ourselves these days? We are stressed, worry too much, think too much, always surrounded by social media. It is so sad to hear people get withdrawal symptoms from not using computer, tablet or mobile phone. Imagine losing internet connection or mobile signal even for a day. What a nightmare!

Having all these in my mind, I enrolled myself to a 6-week photography introduction course this month. I’ve been meaning to learn how to use my camera properly. Learning something new always excites me and feel little butterflies in my stomach. I’m so looking forward to using new camera skills for my blog and travelling. I also decided to restrict myself using social media and internet since my addiction has reached a high level. I easily lose a track of time in an overwhelming amount of information and inspirations on the internet and instagram that keeps on flowing and flowing. Yep, time management!

How do you manage your time? What do you do for fun or relax? 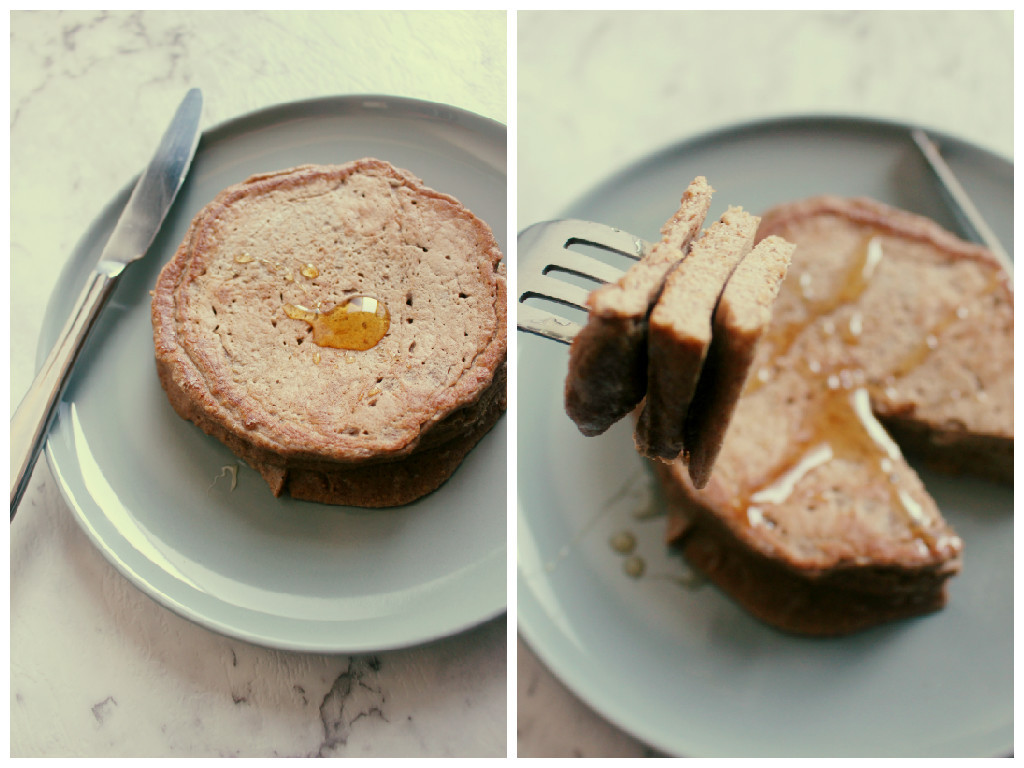 This pancake recipe is super easy to make and delicious. Simply double up the recipe to serve two people or more. Perfect treat for the weekend. Enjoy x

Lightly beat egg and milk in a large bowl. Add all dry ingredients into egg mixture and whisk to combine. Set aside for 5-10 minutes. If batter is too thick, add a little bit more of milk. Heat coconut oil in a non-stick frying pan over medium heat. Ladle batter into a pan. Flip when the bubbles start to form on top and cook for another 2 minutes. Repeat with the rest of batter. Serve warm with a drizzle of honey or maple syrup. 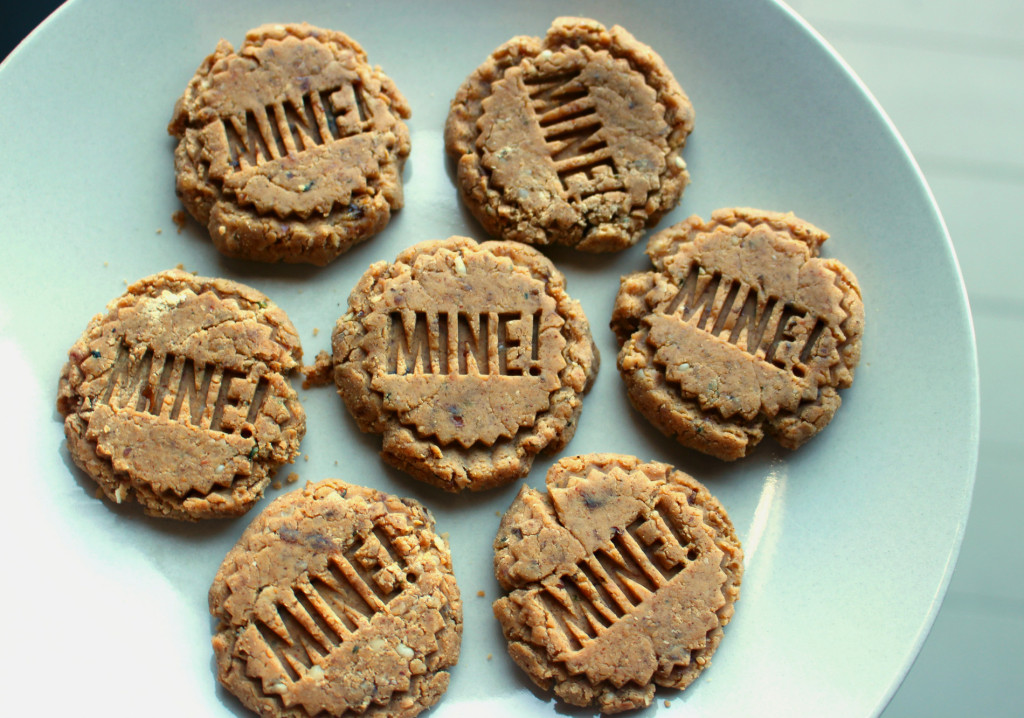 The food we eat affects our mood and in turn our mood directs appetites craving for something sweet or savoury, carb-loaded or deep-fried foods. It would damage your health to just follow your heart and eat whatever you feel like eating, though also unhealthy to suppress your cravings. I’m so fascinated by the relationship between food and mood and health. It seems hard to achieve a total balance between all three though what matters is that we listen to our feelings, try healthy alternatives and feed our body with nutritious and delicious foods. Don’t you agree? I came down with some kind of bugs this week, feeling lethargic, headachey, blocked sinus, sore throat, etc. All I wanted was climb onto the bed and bury myself in there all day. However, it never happened. In fact, I came home after work and spent some time in my kitchen preparing meals and making little treats. Healing time for me 🙂

Who doesn’t like peanut butter? or Cookies? Peanut cookies? When making these neat and nutty little cookies, there is no fragrant aroma of baking cookies in the house you normally expect. Also because of the nature of their making, texture is quite dense and soft unlike the baked crunchy cookies. Though what you will get is incredible peanut butter yumminess, good nutrition and feeling good about treating yourself, thanks to refined sugar-free, gluten-free and low-carbs, I promise it is a pleasingly easy recipe and tastes wonderful. So tuck right in! 🙂 Only one issue is that they just don’t seem to last long in my freezer after I make them. A big mug of tea and a couple of these guys on the side is totally my weakness and a moment of indulgence.

Blend all up in a food processor. Make little balls and press with your favorite cookie stamp. Store in a airtight container in the freezer.

I have a habit of making batches of salads that will last me next few days. I keep telling myself I’ve got to eat more a variety of foods though when I’m addicted to something, then I tend to stick to that for a while. When my main meal is salads, I want it to be interesting, delicious and full of good stuff. So here I am. I cooked like a storm in my little kitchen and put up a few different salads on a plate, which I think is beautiful and vibrant. It is also wholesome, healthy and nutritious. I have to admit it took me an hour plus cleaning up a mess I made in the kitchen. But if you can invest an hour or so on cooking like this, your life gets easier at least next couple of days. Bam! Work lunch and dinner is sorted.

Let’s discuss how this plateful of goodness was made up. 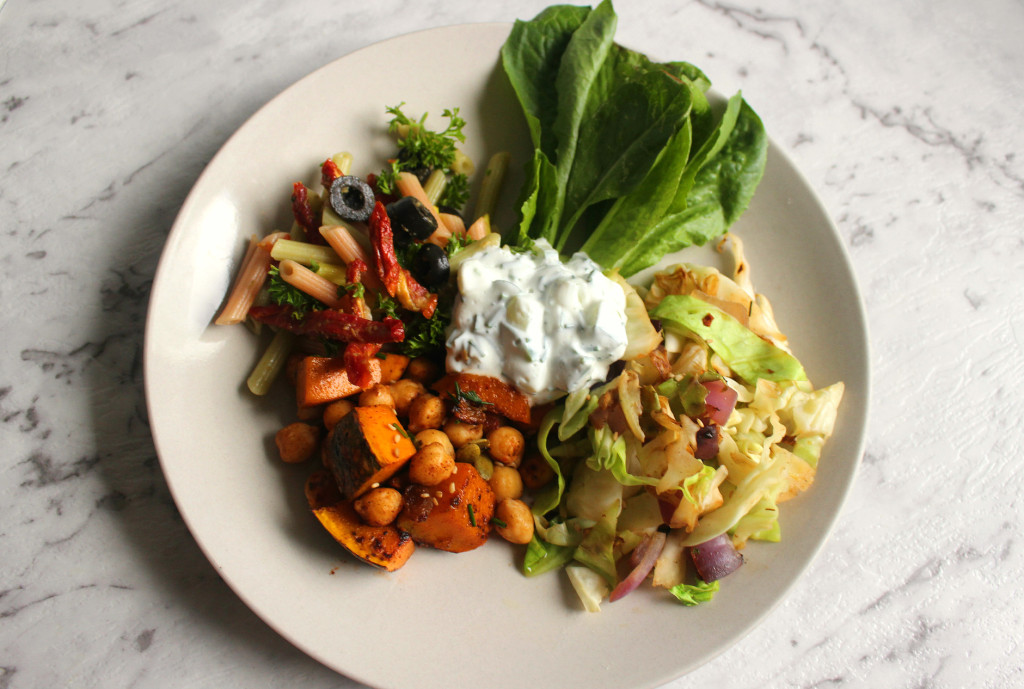 Spicy Chickpea and Pumpkin Salad: I soaked chickpeas in cold water for about 10 hours. Do this before you go to bed or when you leave to work in the morning. Quickly rinse and cover them with water in a pot and boil for 15-20 minutes until cooked. Meanwhile, heat coconut oil in a frying pan over medium heat and add chopped pumpkin. Sprinkle cayenne pepper, smoked paprika, cumin, sea salt and ground pepper. Drain cooked chickpeas and add to a frying pan. Add a bit of more smoked paprika over chickpeas and stir well. Take it off the heat once pumpkin and chickpeas are browned and cooked.

Stir-fried Cabbage and Red Onion: Finely chop green cabbage and red onion and cook with coconut oil in a frying pan until browned. Season to taste and sprinkle caraway seeds and sesame seeds.

What kind of tea do you like? I visited T2 shop in Emporium in Melbourne CBD a few times just because I fell in love with a hundred variety of teas there. There is a lot of health benefits of drinking tea including detoxing, preventing cancer, improving your skin and even weight loss, but hey I just like the smell and taste that calms me down. Whatever reason you choose to drink tea, it is good for you 🙂

– If you are caffeine sensitive, it is probably best to avoid black, white and green tea later afternoon.
– Stick to chamomile and red tea (a.k.a rooibos tea from South Africa) which is caffeine free and very soothing for your digestion!
– Try spiced tea with coconut milk or almond milk and a few drops of stevia.
– Miss coffee? Try chicory root and dandelion. It tastes just like coffee without caffeine.
– Make iced tea in hot summer. Brew the tea. Just add sweetener and slices of your favorite fruits in a jug and keep in fridge up to 3 days.
– Use brewed tea and tea bag for baking such as rooibos, earl grey and chai tea.

I made this tea cake vegan and gluten-free with no refined sugar. So it is not too sweet and quite dense in texture. Having a big dollop of thick vanilla yogurt or whipped coconut cream would be nice. Of course, freshly brewed chai tea on the side, too. 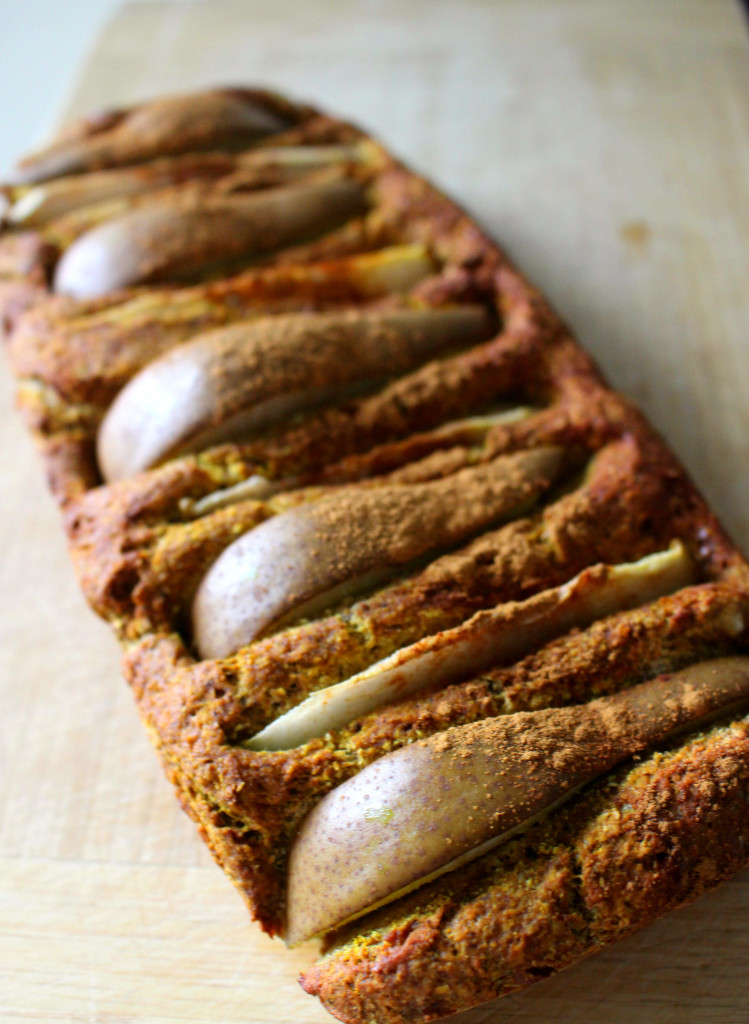 Combine flaxmeal, brewed tea, melted coconut oil, maple syrup and vanilla extract in a large bowl. Add other ingredients, except pear, into a bowl and mix well with a spatula. Pour the mixture into a prepared baking tin. Arrange sliced pear on top and gently press. Bake in the preheated oven (180) for 30 minutes or until cooked. Allow to cool in a tin for 10 minutes before slicing.